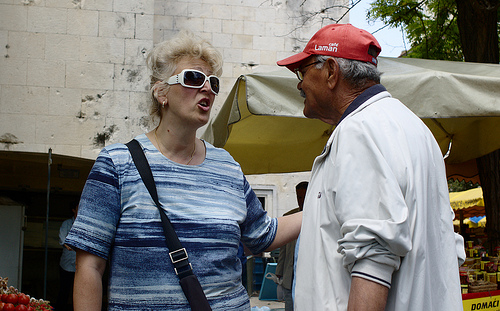 Don’t panic. These are not my words but the title of a book I have yet to read. The title certainly got my attention, as I am sure it did yours. Whether you’re red or blue, west or Midwest, you will agree that we no longer dialogue but debate.

In a debate, we are out to win, to prove that we’re right and the other person is wrong by use of any means. In a dialogue, we are collaborative and focus on creating an understanding and/or a solution together. In politics, dialogue leads to healthy bipartisanship, a slowly dying attitude, causing great rifts not only in politics but also in our families, work places and cities.

Here are the fruits of our labor by our win/lose attitude: fear, bigotry, alienation and hatred. Eventually we all lose. And not just for the next four years and not just in the political arena. All of this affects our children and their learning environment. It alienates friends, families and neighbors. Even shopping has become politicalized.

Hate crimes are on the rise.  We seem to be irrationally afraid of differences in color, ideology and religion. We are responding out of fear like we did with the Japanese, the Irish, the Italians and the Germans. Now it’s middle easterners – particularly Muslims. I will remain grateful to George W Bush. Shortly after the tragedy of 911 hate crimes were on the rise and his response was to visit a mosque.  That small gesture quieted fears.

Please don’t impute motives to these comments. Both Republicans and Democrats are instilling fear and polarized thinking. All of us need to ask ourselves, “What do we want our legacy to be in this, the home of the brave and the land of the free? “

Are we willing to remember and act on the words of Franklin D Roosevelt when he said,

“The only thing we have to fear, is fear itself.”

Do You Love Me?